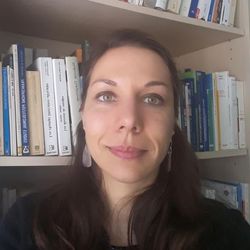 Chloé Chaudet holds a Ph.D. in General and Comparative Literature from Paris-Sorbonne University and Saarland University. Since 2018 she has been working as a lecturer at Centre de Recherches sur les Littératures et la Sociopoétique (CELIS) at Clermont Auvergne University.

Chloé Chaudet participates in the inter-university collective "ZoneZadir - for a transcultural ecopoetics". She works in the areas of sociocriticism and sociopoetics, ecocriticism and ecopoetics, and postcolonial, gender and transmedial studies. Her research interests include general and comparative literature, relations between literature and politics in the 20th and 21st centuries, literature and globalization, as well as conspiracy fictions.

During her stay in Regensburg, she will give a talk on „Transatlantic Circulations of Conspiracism: Europe and the United States” together with Sebastian Herrmann. The event, which is part of the CITAS Brownbag Sessions, takes place on June 21 from 12:15 - 13:45. Details can be found here.