On 11 July, 14:15 in H10 at UR, Gabriele Schwab - Distinguished Professor at the University of California, Irvine, with appointments in the departments of Comparative Literature, Anthropology, English and European Languages and Studies, will give a guest lecture on Transspecies Selves as part of the seminar of Leibniz ScienceCampus, UR and REAF Visiting Professor Claudia Sadowski-Smith. The event is open to all.

We might wonder whether we have reached a stage at which the massive intervention into the natural order of things forces us to extend our sense of species-being to include all living species. In this talk, Schwab argues that such a shift would mean thinking of humans as trans-species beings, which does not refer to posthuman trans-species reproduction but the fact that humans are always already co-constructed in relation with other species. As corporeal, sensuous beings, humans share vulnerability and mortality with other species andare dependent on sustainable environments for their wellbeing. The extent to which human capitalist economies have threatened the life of a sustainable planet by exploiting its resources generates a particular responsibility and obligation to care. We are, in other words, at a historical conjuncture where our ethics of care needs to include trans-species care and our ecologies of mind and personhood need to become grounded in a sense of transspecies selves.

Gabriele M. Schwab is Distinguished Professor at the University of California, Irvine. She holds appointments in the departments of Comparative Literature, Anthropology, English and European Languages and Studies. A recipient of a Guggenheim Fellowship and a Heisenberg Fellowship, her research ranges across critical theory, psychoanalysis, trauma studies, ecology, literature and anthropology, and 20th- and 21st century comparative literatures. Monographs in English include Subjects Without Selves: Transitional Texts in Modern Fiction (1994), The Mirror and the Killer-Queen: Otherness in Literary Language (1996), Haunting Legacies: Violent Histories and Transgenerational Trauma (2010), Imaginary Ethnographies: Literature, Subjectivity, Culture (2012 Winner of the 2014 Choice Award for Best Academic Book), and Radioactive Ghosts (2020). She is also the editor of several collections, including Accelerating Possession: Global Futures of Property andPersonhood (2006 with Bill Mauer); Derrida, Deleuze, Psychoanalysis (2007) and Clones, Fakes and Posthumans: Cultures of Replication (2012 with Philomena Essed). She is currently completing a monograph on Samuel Beckett’s Poetics of the End Times and working on a new book project on Transspecies Imaginaries.

This event is organized jointly with REAF, CITAS and ScienceCampus visiting professor Claudia Sadowski-Smith as part of her seminar at UR. 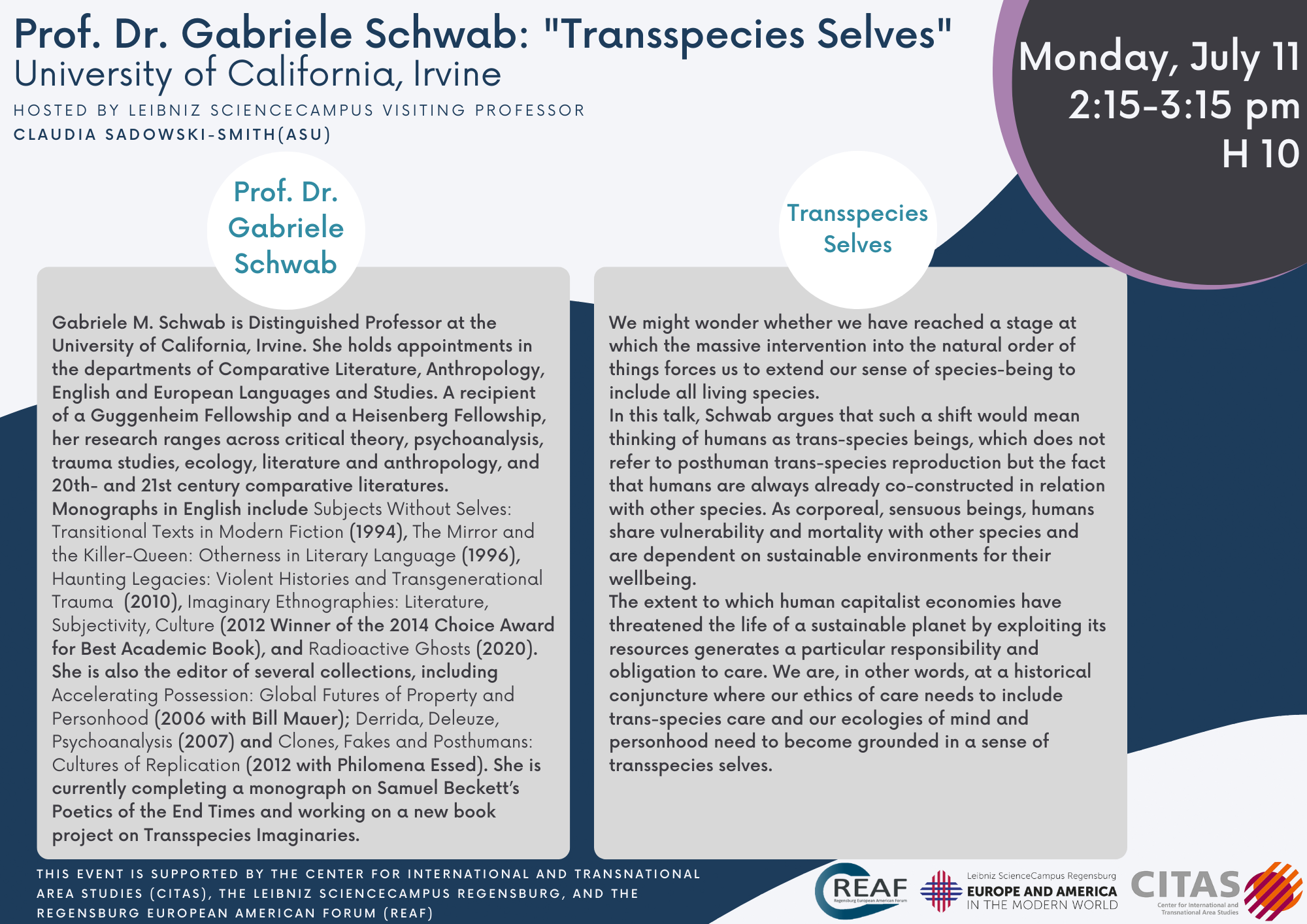